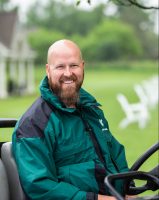 Dr. Ryder as we often refer to him, serves as our Equipment Technician, Club Mechanic, and overall Jack-of-all-trades.  Ben joined The Moors in early 1989, making this his 32nd season with the club!  This began as just a part-time job for Ben to put himself through college, but turned into a wonderful and lengthy career.  Ben is currently a member of the Michigan Golf Course Superintendents Association (MiGCSA) and the Golf Course Superintendents Association of America (GCSAA) to both follow and aid in the growth of the industry and assist in the education of future generations.  Ben has the ability to fix just about anything mechanical in nature and with an IQ Score of 142 (almost 75 points higher than the rest of the staff average), it’s very likely that Ben is mentally superior to you.

Born and raised in Schoolcraft, MI, Ben roots for his alma matter and takes much gratification in watching them stomp Eric Smith’s Lawton Blue Devil teams.  When not at work, Ben enjoys spending time with his wife Laurie, his 11 year-old daughter Alex, and his stepsons Ethan (17), Jared (15), and Evan (13).